After a month of having a Divvy membership, I have been on only nine trips. A slacker, I know; but with two weeks of vacation in there, I'm averaging one trip every other day. As the weather improves, I will certainly be upping that to my goal of seven out of ten trips in a week.

But here-in lies a problem that I have discovered. The Divvy rental is for a thirty minute period, and that is terribly close to the amount of time it takes me to make the trip between LaSalle & Washington and Racine & Belmont. 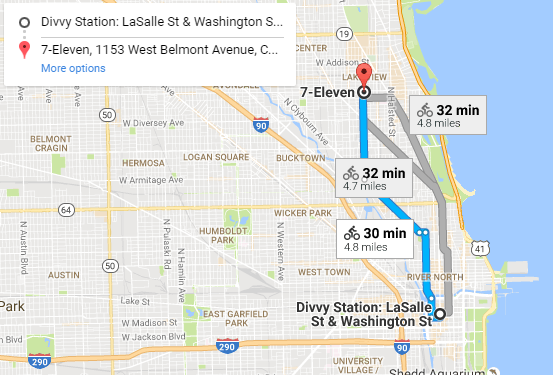 For my first three trips I averaged 27:53, which is dangerously close to the 30 minute allotment. For the next six trips, I took advantage of the "unlimited" rides feature of my pass. In order to be able to take a more leisurely ride home (and be less worried about hitting every damn stop light along the way), I have been stopping at some point along the route, docking my bike, then borrowing the same bike again.

I feel a little like an urban Pony Express rider.

For these dock-and-swap rides, I had two go over the (combined) thirty minute threshold, three below it, and one at exactly thirty combined minutes. Considering that it only takes about 15 seconds for me to dock and undock the bicycle, I think this is the best way for me to get between home and the office without having to worry about going over that magic half-hour mark.

In chatting with other people around the office, it seems that most people think that thirty minutes is just barely too short, and they have shied away from getting memberships because of this. As a comparison, NYC's Citi Bike allows 45 minutes for members, and Phoenix and St. Paul / Minneapolis give a 60 minute grace period for members (both of which are also operated by Bixi). All other cities with 1,000 or more bicycles had a thirty minute duration. These include Boston, Long Beach, Miami Beach, San Diego, and Washington, D.C.

Taking a look at time estimates from Google Maps, for a conservative rider that wants to keep their ride under an estimated 25 minutes, Divvy is basically limiting their customers to only those south of Fullerton, north of 35th St (you can maybe make it to a Sox game!), and east of Garfield Park. By my estimates, just adding 15 minutes to the allotted time will open up a much larger segment of Chicago, even if that time is only offered to members. I really wish I had much better data on population segments, household incomes, commuter routes, and wear costs per mile on the bicycles. Oh the fun I could have with all of that data.

Alternatively, they could just advertise the #PonyExpress option (I'm going to make this happen).