Command Query Responsibility Segregation (CQRS) was not something that I easily understood. Martin Fowler did a thorough job of explaining it in often-linked post from 2011. However, I still did not quite grasp it at the time. I also wasn't working on any project large enough or complex enough that it made sense to use a pattern with that level of depth. When I came back to the concept many years later while working on a significantly more complex project, I could put together all of the puzzle pieces but I still couldn't quite see the whole picture. While researching the topic, I stumbled on a blog post by Cesar de la Torre from Microsoft - CQRS BUS and Windows Azure technologies. His picture was well worth the thousands of words that I had already read. 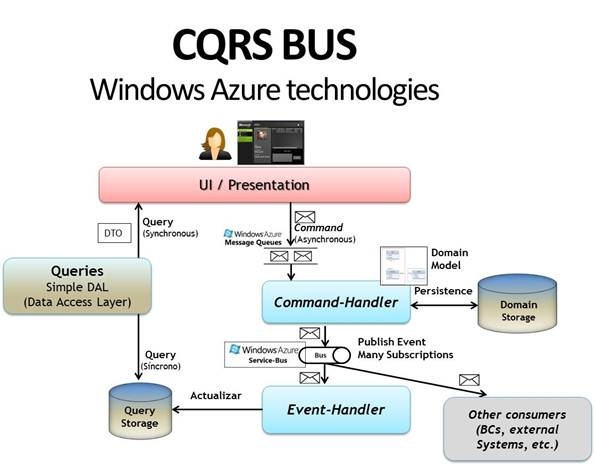 I am limiting the scope of this step of the project to just creating a Message Queue in Azure, writing a command to it, and triggering an appropriate Command Handler. As soon as I started working on the problem, though, I was sidetracked with an important and timely concern — how do I safely store connection information to a remote server? Considering that I work on this project on at least three different machines, I need a highly portable and secure way to store the connection information to my instance of Azure without exposing that connection information to anyone who may look at the code on GitHub. Now, instead of having three steps to this stage, I have four; maybe more. 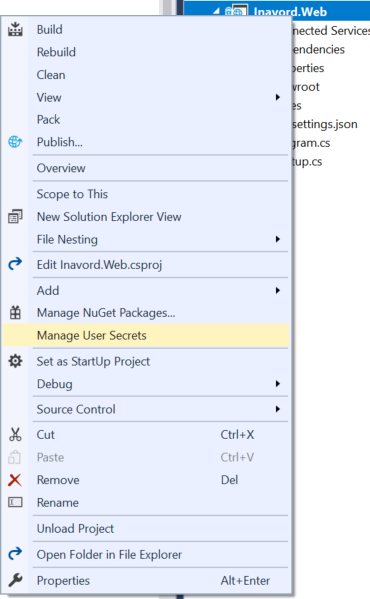 When this migrates to a production ready environment, I will probably use Azure Key Vault or some similar service to manage these types of important secrets. However, for the limited amount of information that I need to keep, I am just going to use the built-in "User Secrets" that comes with Visual Studio 2017. Using the context menu on a Web Application project provides the option to "Manage User Secrets". This pulls up a secrets.json file that lives (unencrypted) on the local filesystem. There are plenty of caveats to its use, namely that it provides no security outside of making sure these settings exist entirely separate from your code. In order to store the information I needed, my secrets.json file looks similar to this.

In order to access the user secrets to the configuration builder, a small piece is added to Startup.cs.

Consuming the secrets is as simple as any other configuration value. Since I only need it right now for the StorageCredentials that get injected into the AzureCommandQueue constructor, I have the creation of the credentials as an extension method on the IServiceCollection. My StartupExtensions class can live anywhere; I have decided to put it in the same project that needs it, Vigil.Azure.

This was the easiest step of them all, because there are many wonderful tutorials already created on how to do get started with Azure Storage. It comes down to three simple steps that can all be done in under a minute (once you know your way around).

The name of the storage account (vigilstorage) and the value of one of the keys goes into the User Secrets, and voilà, the storage account is created. One item that tripped me up was that I expected to need to create the Queue within the portal. As I eventually figured out, that piece is performed exclusively in code.

After many hours of digging through tutorials, hunting down dotnet core versions of the libraries, and trial and error - I finally got to a point where my code compiled and executed and I could test it with a Postman query. I was surprised by how little code it ended up requiring. This is the entirety of what the AzureCommandQueue class looks like:

HOLY SHIT I GOT IT TO WORK

This was one of those "really cool moments" when it comes together how fantastic my job is and how amazing technology truly is. I just had a tool on my computer simulate a user pushing a non-existant button that sends information to another tool on my computer that is pretending to be a web server which then executed code that I wrote to take that message and securely send it up to the internet and sit on some unknown computer where it will stay and wait for me to call upon it.