All things considered, I am content with my performance at the 42nd running of the Bank of America Chicago Marathon. I had been battling a nasty couch all week, I wasn't able to train as hard as I initially hoped, and the weather was very windy. While I came no where close to hitting my Boston Qualifying time, I did manage to improve on my personal record. Finishing at 03:15:36, it beats my previous best by 01:39. By the time next year's Chicago Marathon comes around, I'll only need to lower my PR by six or seven minutes in order to get through to Boston.

The Night Before And Morning Of

I am constantly forgetting to create a night-before packing list, so hopefully I'll remember in the future that I have done so here and maybe I'll revise this list, or correct it as-needed and post it with the next race.

This was the first time departing the new house for a race, so I had a little trepidation about getting downtown. The Brown Line doesn't start running until 5:00, meaning I wasn't going to arrive at the CARA VIP Experience until 5:45. This turned out to be just fine - I get nervous about these things.

So I left my house at 4:45, got to the Rockwell platform with plenty of time to spare, rode the train to Adams/Wabash, and walked the half-block to the Palmer House. The CARA compound was a friendly as ever - lots of familiar faces in various states of wakefulness. I was among those still waking up. Coffee was helping, but slowly.

I remembered to pack nearly everything I needed (I forgot an old pair of socks as hand warmers). I went about my routine of slowly getting into corral+race gear.

The only race gear that I put on at home are my running shorts, and I wear my throw-away shirt and post-race pants while getting to the race. At the compound, I'll change into the rest of my race gear, swing by the bathroom to apply Glide, and then drop off the backpack at gear check. From there, it is a short walk to the CARA VIP Port-a-potties (the closest bathrooms to the start line without having to worry about access to the race's blue boxes).

This year, I departed the hotel earlier than I needed to. Security lines are such a crap-shoot that I feel like a five minute difference in departure time means a 20+ minute wait in the security line. I was smart, this year, by going to one of the later gates that was further away from the Wave 1 gate. There was already a line near Gate 1, but there was absolutely no line at Gate 4 - which also happened to be right by the CARA Ports. Definitely a double-win.

The morning was quite chilly, roughly 39°F (3.8°C), and it never got above 48°F (9°C) throughout the morning. Wind was swirling throughout the day, with a sustained speed of 7mph at the start, increasing to 20mph by race's end - gusting up to 29mph. The long-sleeves cotton t-shirt that I wore over my running clothes was enough to keep the chill off, though I did miss having the gloves/socks to keep my hands warm. I don't think I actually shed the chill until mile 5 or so. 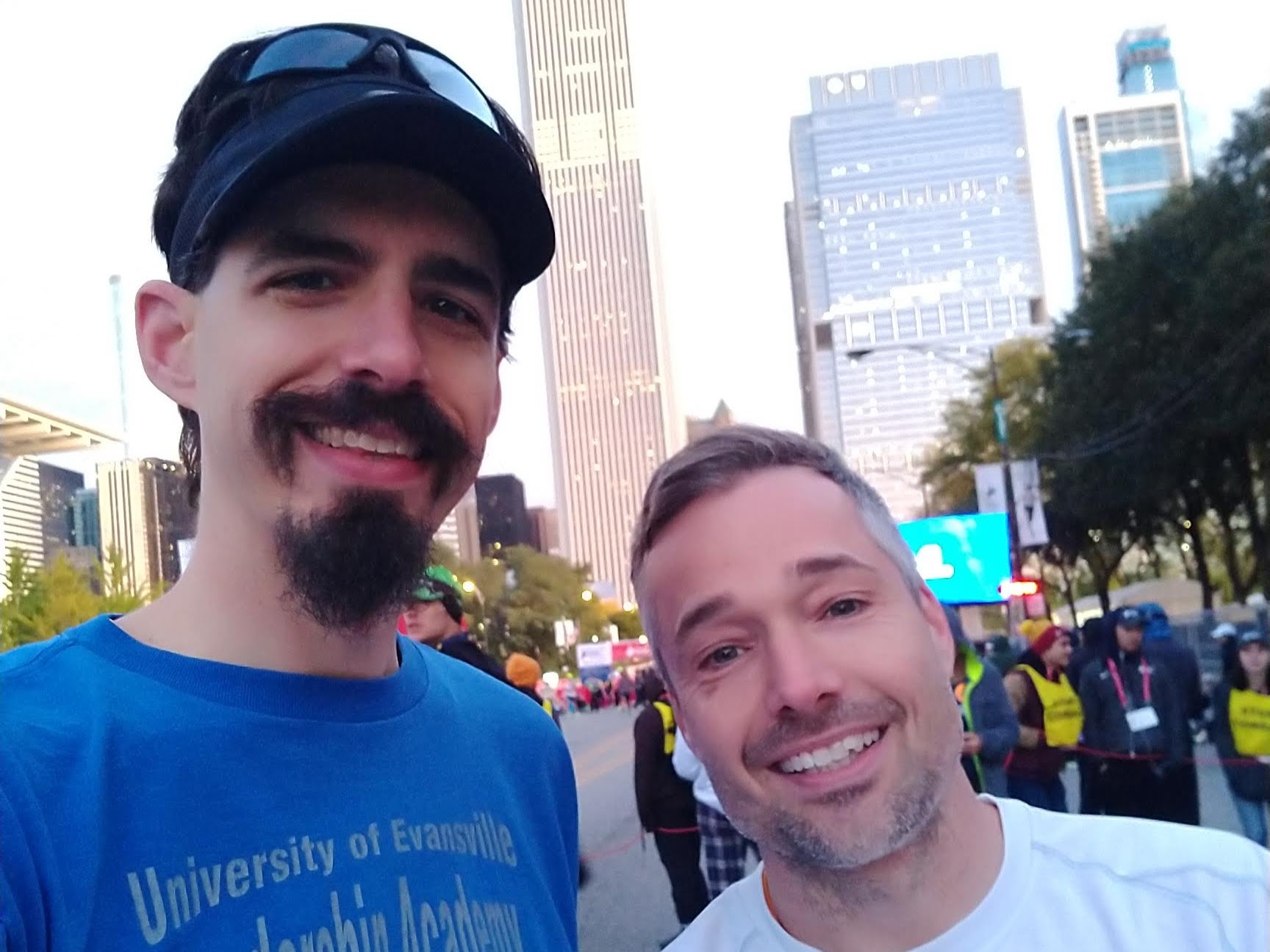 As I was standing in Corral B, waiting for the race to start, I decided that my goal for the race was going to be to keep a BQ pace for the first 18 miles (roughly 2/3 of the race) and then do the best I could to PR from there. Doing the math, that meant that if I could hold 7:00/mile pace, I would leave myself with 01:11:15 to finish the last 8.2 miles (an 8:40/mile pace) and still PR. I knew that my training this summer had not lent itself to putting me in a good place to BQ, and I had been battling a nasty cold and cough all week. Setting realistic goals was my best chance for mental success. 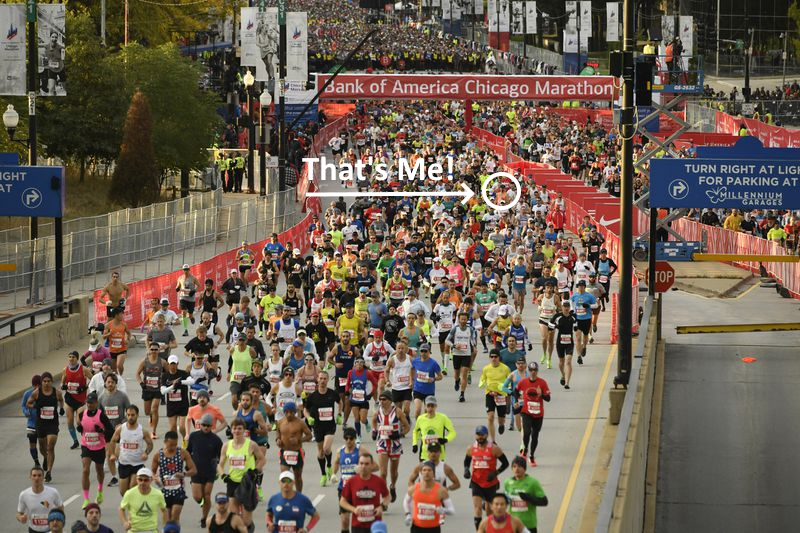 The first fifteen minutes of a marathon always feel great. The excitement of all the runners around me is intoxicating, after feeling cold for an hour it was good to start moving, nothing is sore yet. Then, around mile two is when I usually have to explicitly mentally check back into the race, evaluate my form, double-check my pace - generally just make sure I'm doing everything I'm supposed to. That's also about when it hits me that, yes indeed, I'll be doing exactly this for another three hours.

Around mile 4 is when I get to start looking for my wife - always on the runners' left of the road. She is just this ball of excitement that helps carry me for the next few miles. I'll see her again around mile 11, which helps to break up that first half of the marathon. Then it's the mental game of getting myself to the halfway point.

Late in Mile 4, just before the second water station, I tried to eat the first half of a LaraBar. During training, I had found that half of a bar every four miles is what worked out best for me. However, with the cold I had, I couldn't breath at all through my nose, and I nearly choked on the bar. I barely got one small bite down, and I didn't want to sacrifice a lot of time having to walk and chew before the water stop. I pocketed a majority of the bar and soldiered on, hoping things would clear up later. 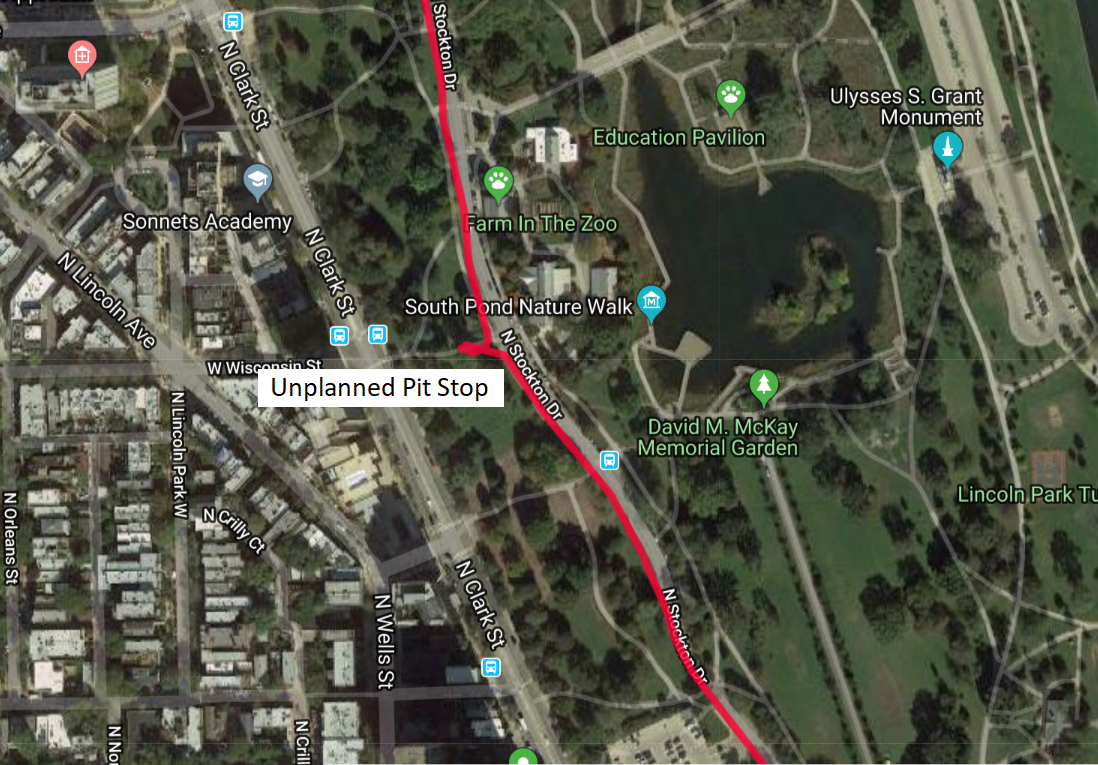 Shortly thereafter, my bladder started really nagging me. I've been in this situation before, and the lesson learned was to take the time hit early, use the port-a-potty, and get back on course. So I did just that. According to my Garmin, I lost approximately 30s - not too terrible.

Come mile 8, I tried again to eat some LaraBar but with the same result. It was still early enough that I could hopefully modify my strategy without too much hard. I tossed the remainder of the bar and decided to do a quick gulp of Gatorade at each stop instead of only taking a half-cup of water with each piece of bar.

Mile 11 had a quick pause to kiss my wife, then onward to the halfway point. At 01:31:20 for the first 13.1 miles, that beat my best Half Marathon time (and was my second-fastest first-half of a marathon). It felt great to hit that milestone, but I could also tell that I was struggling. With the swirling wind, time lost to the pit stop, changes in my nutrition plan, and a general sense of dread at doing this for another hour-and-a-half, I almost gave myself a walking break right there. This was the earliest in a Chicago Marathon I had my mental "maybe I can't do this" - it happens every race at some point, but not this early. 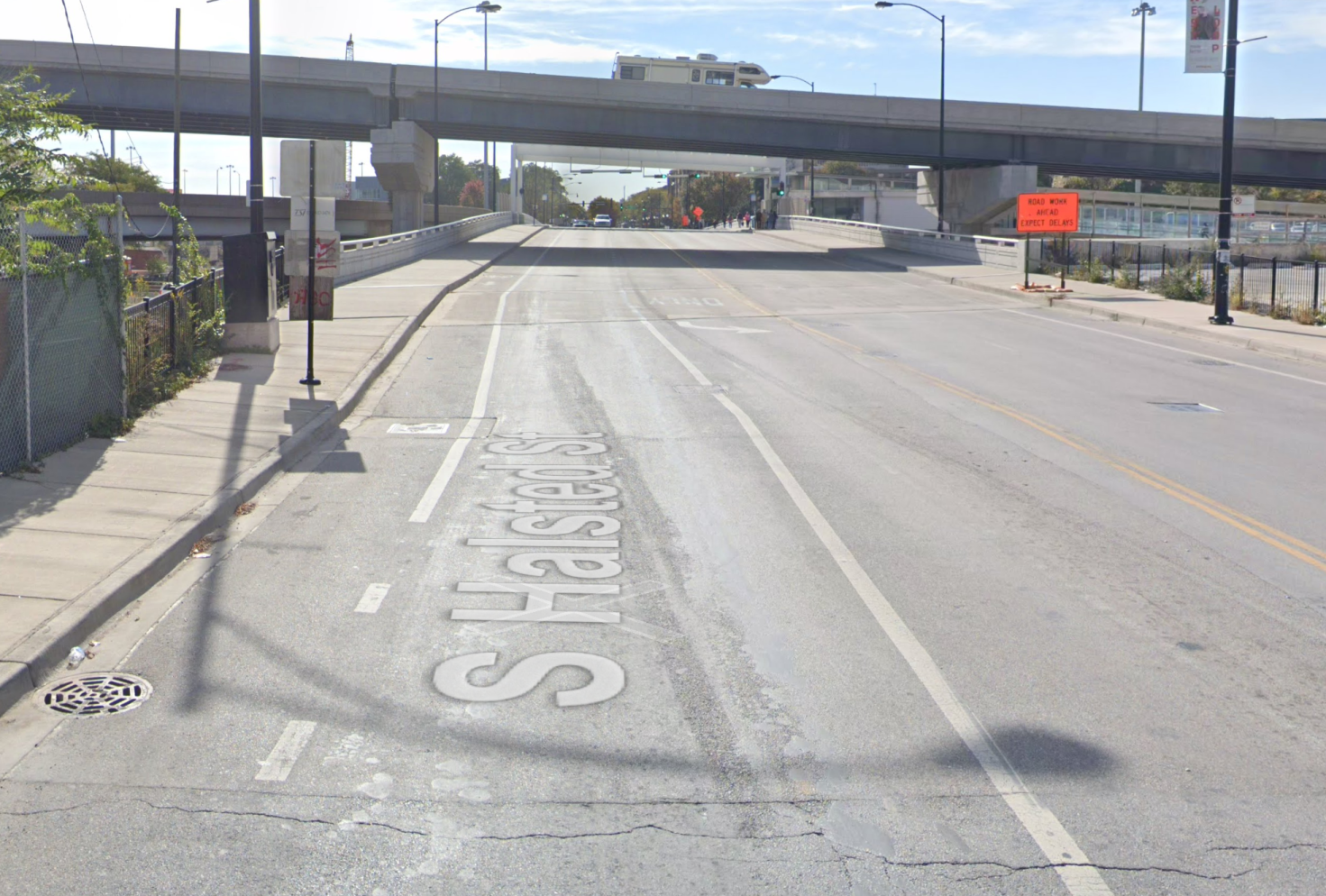 I reminded myself of my first goal - get to 18 miles at BQ pace. That meant I just had to keep it up for 5 more miles; just 35 more minutes. Then it was just 28 more minutes, then just 21 more minutes, then just 14 more minutes - ok, I can do this for two more miles. The Halstead overpass between mile 17 and 18 is always a struggle. It's a big hill (by Chicago standards) that is very exposed to wind and car noise, and previously has been the first point where I usually start regretting my life decisions. This year was no different. But I had to run to 18 - just 3 more minutes.

I did it. I got to mile 18, pulled off to the side, and had a coughing fit so hard that I nearly threw up. Shortly thereafter, the 03:05:00 pace group passed me. I slowly ran to the Gatorade energy gel table, squeezed down a packet of vanilla, grabbed some water to wash it down, and set off again. The new plan was to run for two miles then walk a little - four intervals and then it would be done.

Surprising even myself, that's exactly what I did for the rest of the race. The two miles of running was slow - averaging between 7:45 and 8:00/mile. I stopped looking at my watch, stopped worrying about pace. It was just about running to the next even mile marker, walking for a block, then running again. By the time the last stretch hit, I wanted to walk several times, but I just knew that if I started walking, I wasn't going to start running again. I just had to finish this and hope that I had put in enough time to still set a PR. I know I managed to smile and wave while crossing the finish line, and I remembered to stop my Garmin, but I didn't know whether I had PR'd or not. I had finished and that's what I cared most about.

I had put so much focus at the beginning of the year on qualifying for Boston that it took a little bit for it to sink in that I had indeed set a PR. I definitely needed to be proud of that. I had also hit my goal of staying in front of the 03:05:00 pace group for 18 miles. I have always been terrible at recognizing the achievement of completing a marathon, much less doing it faster than I've done before. I get caught up in the lofty goal that I set and then get down on myself for not hitting it. 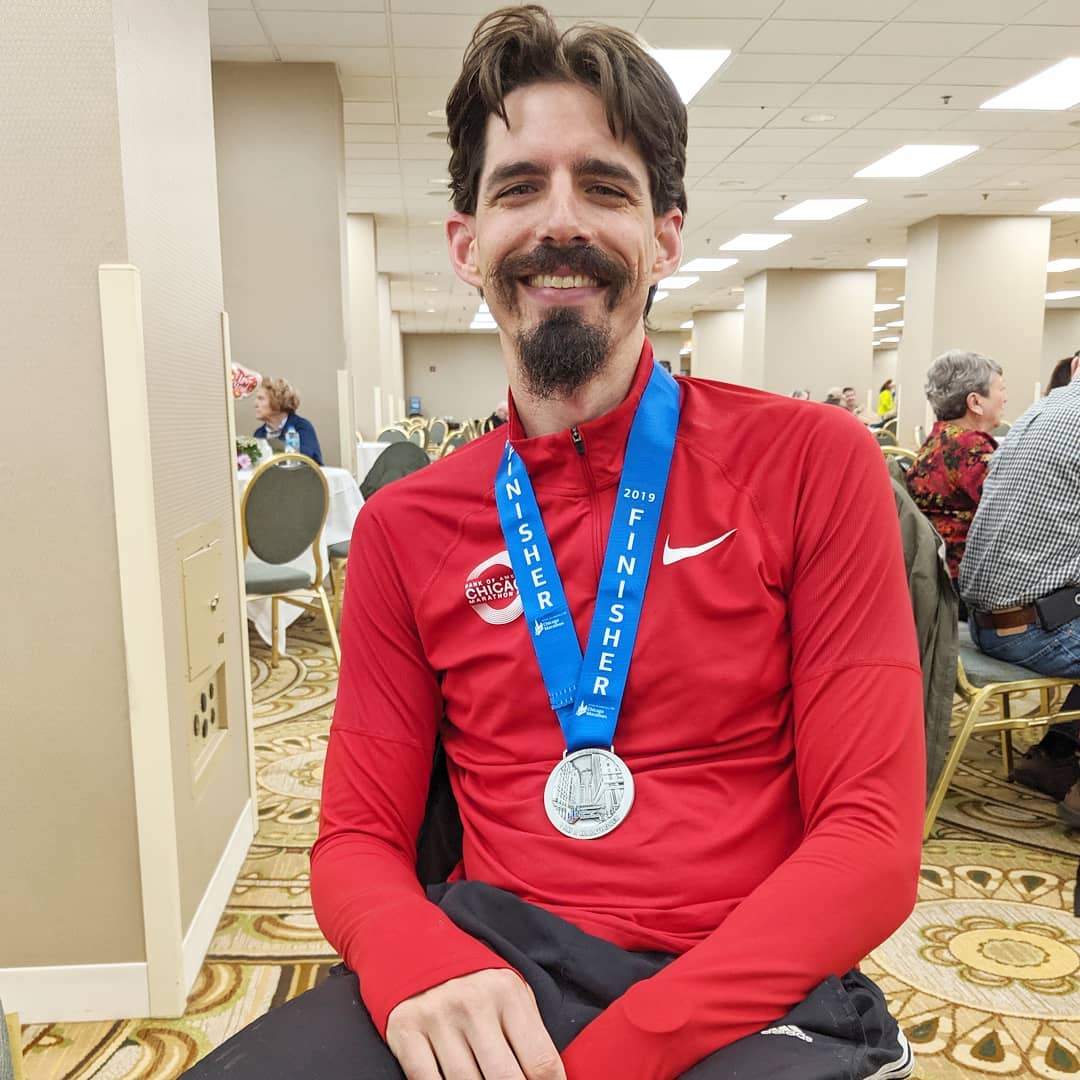 Wrapping it all up, I am grateful for having set a new personal record. I am grateful for the love and support of my entire family for encouraging me all through training. I am especially grateful to my wife for putting up with all the highs, the lows, the early mornings, the bitching and complaining, the smelly clothes, and that she is still so excited to come out on a cold Autumn morning to see me for a grand total of probably two whole minutes. It always has meant a lot to me and continues to mean a lot.