Now that I have a static list, the next step is to make it slightly more dynamic. This means that I need to learn how to send something back to the server, instead of just retrieving data from the server. My guess is that a delete method should be easier than an insert of a new record, though I expect them both to be about equal. The first piece I recognized that I needed to add is an identifier for indicating which record to delete. I am a big fan of using a Guid as the datatype for a "primary key", so I quickly added a new field to the BlogPost and added that to my seed data. But how to I make a button in Angular and then make a DELETE call to the controller with the id of the selected post?

The second in a four-part series of posts on 'An Assessment of a Technical Assessment'.

It was time for me to turn to the tutorial. The Tour of Heroes tutorial on the Angular website certainly looked to be what I needed. I tried jumping straight to "Delete a hero", but it's talking about services and delegates and... whoa. Ok, time to take it back to the top.

I zipped back to the top of the tutorial and quickly made sense of a lot of the work that the initial Visual Studio template created for me. Much of what the early parts of the tutorial teach the user were refactors that I thought would be necessary, but I didn't know how to do it yet.

What do I get after all that refactoring? Exactly the same output - which is what I had hoped for. No new functionality has yet been added, but I feel better about where things are. 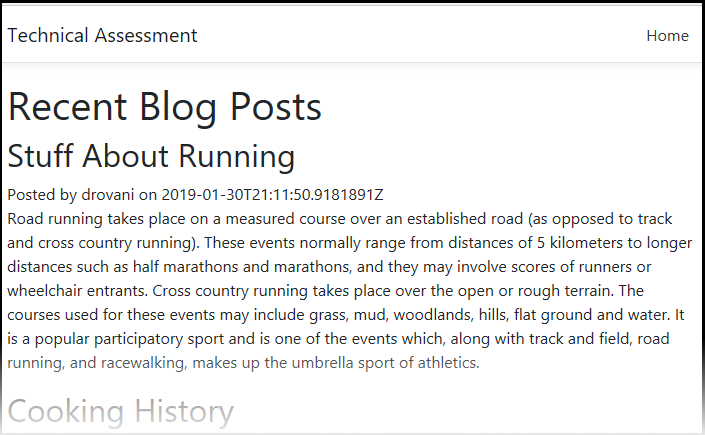 After a much longer time than I wish to admit, the problem was that I needed to put the id parameter in the attribute. Clearly I needed more coffee this evening.

From there, I was able to verify that the call made it into the BlogPostService that I had previously created. It properly removed the item from the original list and returned a 200:OK response. All is well, and I am going to call this step complete. Once I get the entire front-end working, that's when I will handle persisting these changes to some storage medium. This part reminds me of my User* Can Create** New Patron*** post from 2016.